This week we had an extremely unique survey I want to talk about!

After a sperm whale sighting, described in Laura’s most recent post, we then started surveying again. Suddenly a reflection of the sunlight on something caught my eye near the horizon. The second time I saw a large body jumping out of the water: a dolphin!

I immediately told Davide and we headed there. I was delighted to realize they were striped dolphins which I hadn’t seen yet. The first thing I noticed was how quickly they swim! They are much quicker than bottlenose dolphins which are easier to keep an eye on.

We estimated a group of about twenty-five dolphins. The calves, very curious and playful, swam rapidly towards the boat, jumping and bow riding. When they grew tired of entertaining us, they swiftly moved back to the group. As quickly as they appeared they were gone!

We thought to had been lucky of seeing a sperm whale, but in the end, it turns out we got lucky twice spotting two beautiful offshore species! 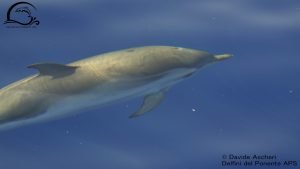